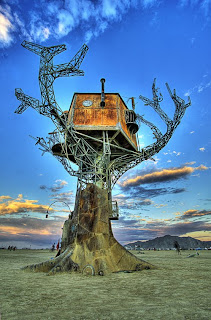 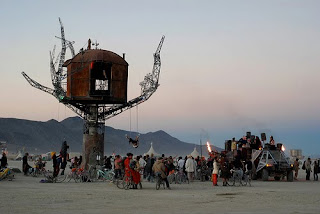 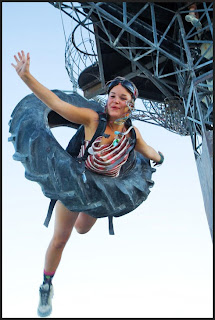 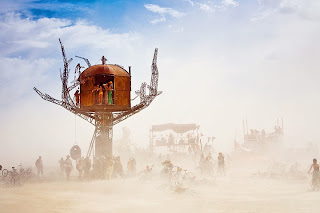 -In 2007 i was lucky enough to be part of the burning man festival and witness the first exhibition of the fantastic steampunk treehouse, a massive metallic tree house with apparent metallic tree structure that feature steam whistle and tons of great details on the inside... a fantastic experience...today the tree house found a final home ...

The Five Ton Crane Arts Group proudly announces…!
the historic, permanent installation of…!
the beloved Steampunk Tree House!
This iconic, fully immersive work of art was the first epic creation by the Oakland based arts group Five Ton Crane. First exhibited at the 2007 Burning Man festival in Nevada, it went on to capture imaginations all over the world!
This June 2010 the Tree House will plant its permanent roots on the East Coast. Visitors can once again clamber up the trunk, peer through the spyglass, look out over the balcony, work the brass levers of the Triaparator, flap the kinetic wings of the vulture and wonder at the story behind this mysterious habitation that they have stumbled upon.

This is the first time in the history of Burning Man that a large-scale sculpture of this type, originally funded for the playa, has been permanently installed … anywhere!